Drawn largely from the Art Jameel Collection, Artist’s Rooms is a series of solo exhibitions by influential, innovative artists, with particular focus on practitioners from the Middle East, Asia and Africa. These capsule shows are collaborative and curated in dialogue with the artist.

This Whole Time There Were No Landmines
This exhibition features the video and sound installation This Whole Time There Were No Landmines (2017). Made from mobile phone footage and audio recordings found in 2011, the work documents a ‘shouting valley’ that lies in the contested area of the Golan Heights, Syria. This stretch of land became annexed by Israel from Syria following a ceasefire in 1967 and is named ‘the shouting valley’, as the areas topography allows for an acoustic leak across the border. Subsequently, separated families have gathered on either side of the border in order to shout across the divide to each other and remain in contact.

To My Brother
Taysir Batniji explores loss and memory in To My Brother (2012), a series of inkless ‘drawings’ etched onto paper. Based on family photos of his brother’s wedding, the work commemorates his brother’s death, which took place two years after his wedding, resulting from sniper fire during the first intifada in Palestine in 1987. To My Brother was originally awarded as a commission through the Abraaj Group Art Prize in 2012, and recently acquired for the Art Jameel Collection.

In Vitro
Larissa Sansour’s film, In Vitro (2019), is an Arabic-language sci-fi film, set in the biblical town of Bethlehem during the aftermath of an eco-disaster. The film presents an otherworldly reflection on memory, history, place and identity, with the locale of the film providing a narratively, politically and symbolically charged backdrop. Commissioned by the Danish Arts Foundation for the 58th Venice Biennale. Co-produced by Spike Island and Art Jameel, this is the regional premiere of In Vitro, co-directed with Søren Lind, and featuring internationally renowned actors Hiam Abbass and Maisa Abd Elhadi.

Lawrence Abu Hamdan (born 1985, Amman) is a ‘Private Ear’. His interest with sound and its intersection with politics originate from his background as a touring musician and facilitator of DIY music. The artist’s audio investigations have been used as evidence at the UK Asylum and Immigration Tribunal and as advocacy for organisations such as Amnesty International and Defence for Children International together with fellow researchers from Forensic Architecture. Abu Hamdan received his PhD in 2017 from Goldsmiths College, London and he is currently a fellow at the University of Chicago.

Taysir Batniji’s (born 1966, Gaza) work, often tinged with impermanence and fragility, draws inspiration from his subjective story, as well as current events and history. His methods of approach always distance, divert, stretch, conceptualise or simply play with the initial subject, offering, at the end, a poetic, sometimes acrid point of view on reality.

Taysir Batniji studied art at Al-Najah University in Nablus, Palestine. In 1994, he was awarded a fellowship to study at the School of Fine Arts of Bourges in France. Since then, he has been dividing his time between France and Palestine. During this period, between two countries and two cultures, Batniji has developed a multi-media practice, including drawing, installation, photography, video and performance.

Taysir was awarded the Abraaj Group Art Prize in 2012 and became the recipient of the Immersion residency program, supported by Hermes Foundation, in alliance with Aperture Foundation (2017). His works are part of collections at the Centre Pompidou, Paris; FNAC, France; V&A and The Imperial War Museum, London; The Queensland Art Gallery, Brisbane; and Zayed National Museum, Abu Dhabi.

Sansour is an alumni of Film London Artists’ Moving Image Network. Her films have been shown at the international film festivals in Berlin, Rotterdam, Guanajuato, Bucharest, London and Locarno. 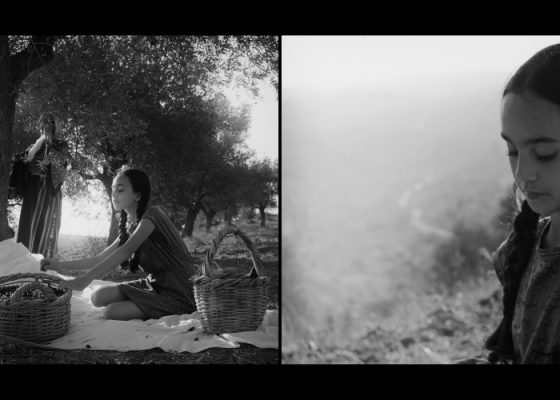