Dar Al Sulh, or Domain of Conciliation, refers to territory where an agreement between Muslims and non-Muslims has been made and provides freedom of religion, autonomy, and protection. Historically this agreement applied to Jews, Christians and other religions in Iraq and elsewhere in the Middle East.

In conjunction with his solo exhibition at the Jameel, Michael Rakowitz will be serving food traditionally prepared by the Iraqi Jewish community, with recipes sourced from his grandmother who left Iraq in the 1940s along with most of the country’s Jewish population.

The dinner will be served on plates and trays originally belonging to members of the Iraqi-Jewish community.

This iteration at the Jameel includes music compiled by Regine Basha and a text by Dr. Ella Habiba Shohat.

Registration is essential for this event. Please click on the RSVP link to the right to register. To complete registration please follow instructions received by email.

Dar Al Sulh was originally commissioned by The Moving Museum, and hosted for 7 nights at Traffic, Dubai in May 2013.

Michael Rakowitz (b.1973) is an artist living and working in Chicago and is Professor of Art Theory and Practice at Northwestern University. He was awarded the Fourth Plinth commission in London’s Trafalgar Square in 2018 and is the recipient of the 2020 Nasher Prize for Sculpture, in recognition of his vision of sculpture’s possibilities in the face of political and humanitarian crises. His work has appeared in venues worldwide including dOCUMENTA (13), P.S.1, MoMA, MassMOCA, Castello di Rivoli, Palais de Tokyo, the 16th Biennale of Sydney, the 10th and 14th Istanbul Biennials, Sharjah Biennial 8, Tirana Biennale, National Design Triennial at the Cooper-Hewitt, Transmediale 05, and FRONT Triennial in Cleveland. He has had solo projects and exhibitions with Creative Time, Tate Modern in London, MCA Chicago, Lombard Freid Gallery and Jane Lombard Gallery in New York. He is the recipient of the 2018 Herb Alpert Award in the Arts; a 2012 Tiffany Foundation Award; a 2008 Creative Capital Grant; a Sharjah Biennial Jury Award; a 2006 New York Foundation for the Arts Fellowship Grant in Architecture and Environmental Structures; the 2003 Dena Foundation Award, and the 2002 Design 21 Grand Prix from UNESCO. 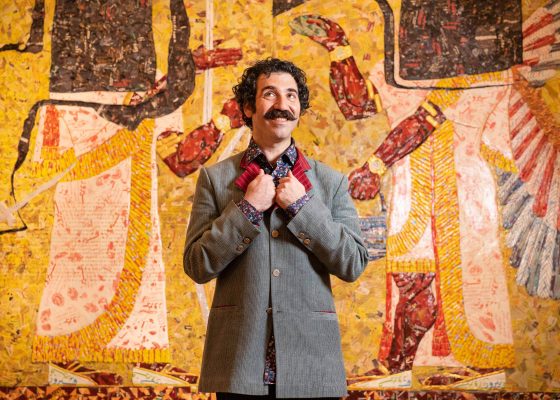