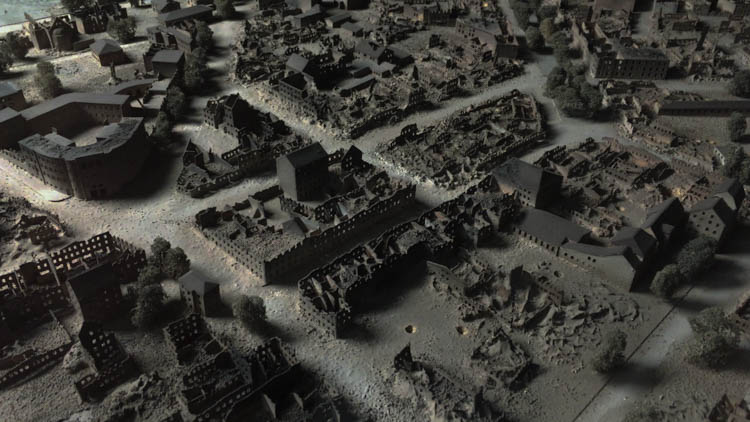 Often placing himself in the position of the amateur, of the learner, Hiwa is interested in exploring how collective, or horizontal, forms of knowledge exchange and learning can open up spaces that counter or complicate more vertical forms of interaction, such as academic or institutional forms of knowledge production.

Commissioned for the solo exhibition is a large-scale carpet Destruction in Common on which an aerial view of the city of Baghdad is imprinted. The carpet serves as a space on which to gather individually or collectively and engage in workshops, performances and meditations that probe ideas of Vertical and Horizontal knowledge systems, embodied ways of knowing and relating to place, and situating oneself and one’s body within a given space. The first among these interventions is this workshop led by Lina, a 5Rhythms practitioner, exploring the notion of Verticality and Horizontality, the Fall of the ego, embodied experience of knowledge, perception and movement while reflecting upon the trauma and destruction that is shared across cities past and present.

The first iteration of this workshop took place on December 19, 2021. This is the final session in the series.

Lina Nahhas, is a 5Rhythms® practitioner and teacher, one of the first in bringing the creative dynamic practise to the region in 2010. Created by Gabrielle Roth over 50 years ago, amidst modalities within the human potential movement, and now practised by tens of thousands worldwide, 5Rhythms® is a philosophy, perspective, performance art and a dynamic movement practise rooted in the principle that “if you put your body into motion, the psyche will heal itself”.  Lina is a Waves® level certified teacher, weaving teaching into her life whilst running her social innovation work via The Sameness project, and drawing inspiration from her daughter Jood.