Visualizing Palestine brings together five mediums—digital, print, three-dimensional artwork, the human body and movement in space—to explore and connect with a single map derived from a series of highly detailed maps of Palestine from the British Mandate period, based on the final British surveys before the Nakba.

In this exhibition and series of events—mapathon workshop, conversations, and more—Visualizing Palestine brings the public to touch Palestine, as land, as place, intimately. This collaboration features key Visualizing Palestine projects based on those maps, including A National Monument and Palestine Open Maps.
These works also highlight partnerships carried out by Visualizing Palestine throughout 2018 and 2019, with artist Marwan Rechmaoui, systems design engineer Majd Al-shihabi, and with the American University of Beirut’s Palestine Oral History Archive project.

VP works in partnership with organisations and individuals from across civil society. Its infographics have been used and exhibited ‘offline’ by activists, educators, cultural workers and institutions in over 420 cities and 65 countries around the world. VP’s work has received international awards from organisations including Ars Electronica and Deutsche Welle, and has been widely published, including in the 2017 edition of The Design of Dissent by Milton Glaser and Mirco Illic. It Takes a Team: Visualizing Palestine Co-founders & Partners in Conversation 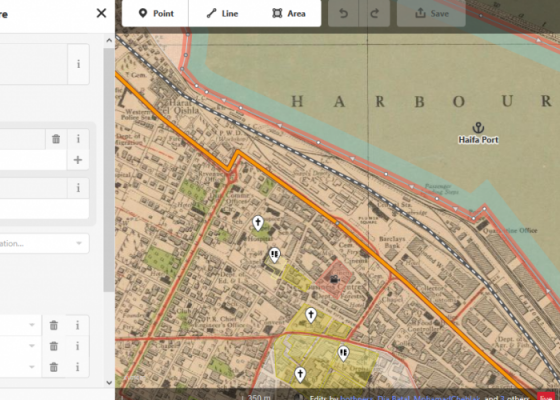