Study for a Garden 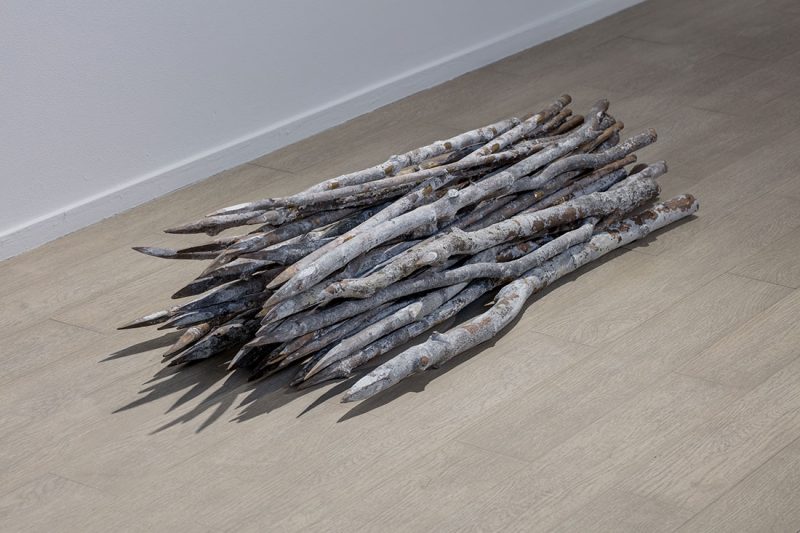 Study for a Garden

Abbas Akhavan often titles his works as ‘studies’, undermining the idea of expertise, and directing our focus on their ephemeral and open-ended qualities. Study for a Garden has been used as a title for many of his works, and relates to Akhavan’s ongoing research and concerns about the environment.

This work consists of a pile of sharpened sticks stacked on the gallery floor. Akhavan’s exploration of plants and nature in this work, as well as the selection of bronze as a material, is used as a catalyst to address certain histories and politics. Resembling petrified wood, these tree branches can also be repurposed as spears or weapons. These rudimentary looking handmade makeshift weapons are cast in bronze; a material that historically has roots in survival tactics, weapons and historical monuments that record public figures or events.

Abbas Akhavan (b.1977, Tehran) lives and works in Toronto, Canada.

Abbas Akhavan’s practice ranges from site-specific ephemeral installations to drawing, video, sculpture and performance. The domestic sphere, as a forked space between hospitality and hostility, has been an ongoing area of research in his practice. More recent works have shifted focus, wandering onto spaces just outside the home – the garden, the backyard, and other domesticated landscapes.  Abbas’ most recent solo exhibitions include at the Wattis Institute for Contemporary Arts, San Francisco (2019); The Power Plant Contemporary Art Gallery, Toronto (2018); The Third Line, Dubai (2018); Douglas Hyde Gallery, Dublin (2017); and Villa Stuck, Munich (2017). His work has been featured in group exhibitions at Galleria d’Arte Moderna Milano, Milano (2018); MOCA Cleveland (2017); Thames Art Gallery, Toronto (2017); SALT Galata, Istanbul (2016); Welcome Collection (London (2016); and Solomon R. Guggenheim Museum, New York (2016). He is a recipient of the Fellbach Triennial Award (2016), the Sobey Art Award (2015), the Abraaj Group Art Prize (2015) and the Kunstprei Berlin (2012).
www.abbasakhavan.com