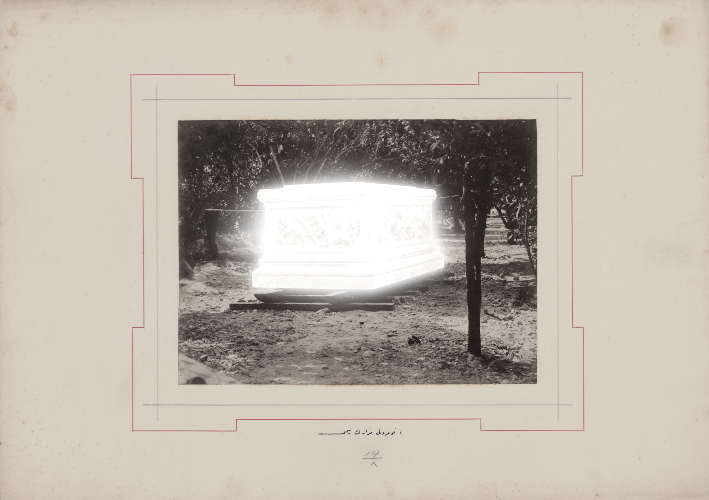 Akram Zaatari works with photographic archives to interrogate the writing of history, the circulation of imagery and the production of meaning, particularly in relation to film and photography. He is an avid collector and researcher of photographs, often intervening on the images themselves to enable a more complex reading of historical moments. Here, the artist has gathered eight photographs taken in 1887 in south Lebanon by Osman Hamdi Bey. The photographs document the discovery and excavation of 19 Phoenician sarcophagi before they were swiftly dispatched to Istanbul and are the only known record of this moment.

Akram Zaatari has produced more than 50 films and videos, all sharing an interest in writing histories, pursuing a range of interconnected themes, subjects, and practices related to excavation, political resistance, the lives of former militants, the legacy of an exhausted left, the circulation of images in times of war, and the play of tenses inherent to various letters that have been lost, found, buried, discovered, or otherwise delayed in reaching their destinations. Zaatari has played a critical role in developing the formal, intellectual, and institutional infrastructure of Beirut’s contemporary art scene. As a co-founder of the Arab Image Foundation, he has made invaluable and uncompromising contributions to the wider discourse on preservation and archival practice. Zaatari represented Lebanon at the Venice Biennial in 2013 with his film Letter to a Refusing Pilot. His work has been featured at Documenta13 in 2012. His work is part of institutional collections such as the Centre Pompidou, Paris; Guggenheim Museum, New York; Hammer Museum, Los Angeles; K21 Dusseldorf; MACBA, Barcelona; MoMA, New York; Serralves Foundation, Porto; Tate Modern, London and Walker Art Center, Minneapolis.