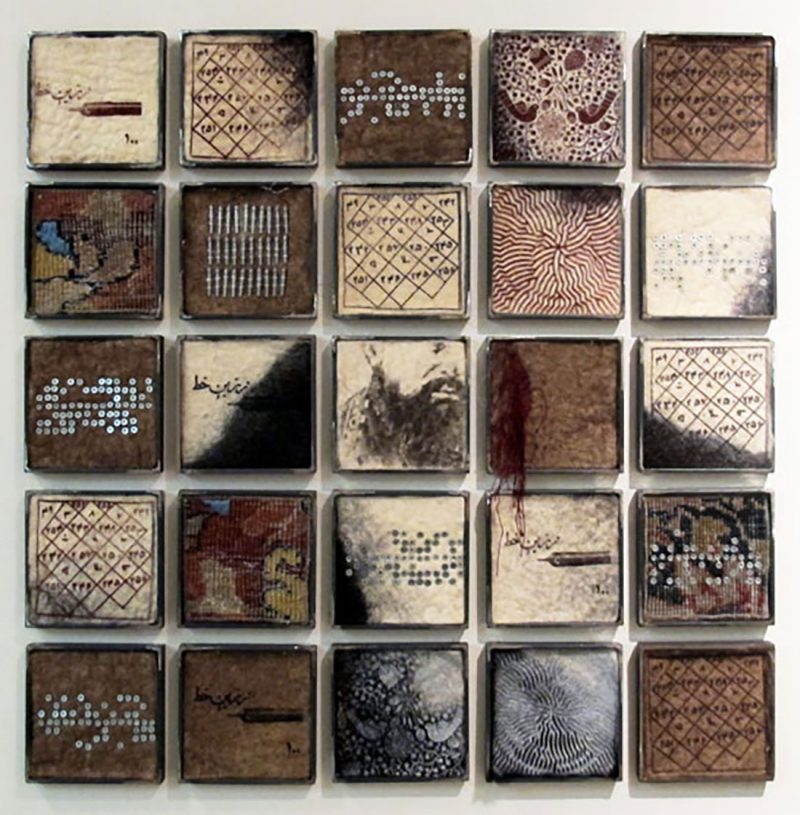 Talismanic Fragments was inspired by the art of felt-making among Turkmen women, and each piece evokes tile designs evident throughout the Middle East. Similar in size and pattern, each square contains a fragment designed to provoke reflection on the values of tradition and conservation, with particular emphasis on talismanic beliefs.

Influenced by post-revolutionary popular culture, Ghezelayagh uses found objects and other street symbols combined with printed phrases, silk screen printing and embroidery to cover the surface of her work. Felt embodies qualities such as protection, heft and resilience. It also connects the past to the present, and reserves one of many traditions that Ghezelayagh believes is becoming lost in contemporary Iran.

Bita Ghezelayagh (b. 1966, Florence) lives and works between Tehran, Iran and London, UK.

Bita Ghezelayagh is a textile artist, with an interest in reinterpreting Islamic textiles for a modern artistic context. Her works are an embodiment of qualities such as simplicity, heft and resilience, which she noticed are often disregarded in the Irani march to modernity. She holds a Master’s degree in architecture from Paris and a printmaking degree from London. Bita has had recent solo shows at Asia House, London (2017); Museum of Contemporary Art, Sharjah (2014); and Victoria and Albert Museum, London (2011); British Museum, London (2011); Beirut Exhibition Centre, Beirut (2011); Institut du Monde Arabe, Paris (2011-12); Centro Cultural Banco do Brasil, Rio de Janeiro, Sao Paulo and Brasilia (2010-11). In 2011 she was shortlisted for the Jameel Prize for Islamic Art. Her work is in the permanent collections of the British Museum, London; The Farjam Foundation, Dubai; Devi Art Foundation, Delhi; Lajevardi Foundation, Tehran; and Jameel Foundation, Saudi Arabia.