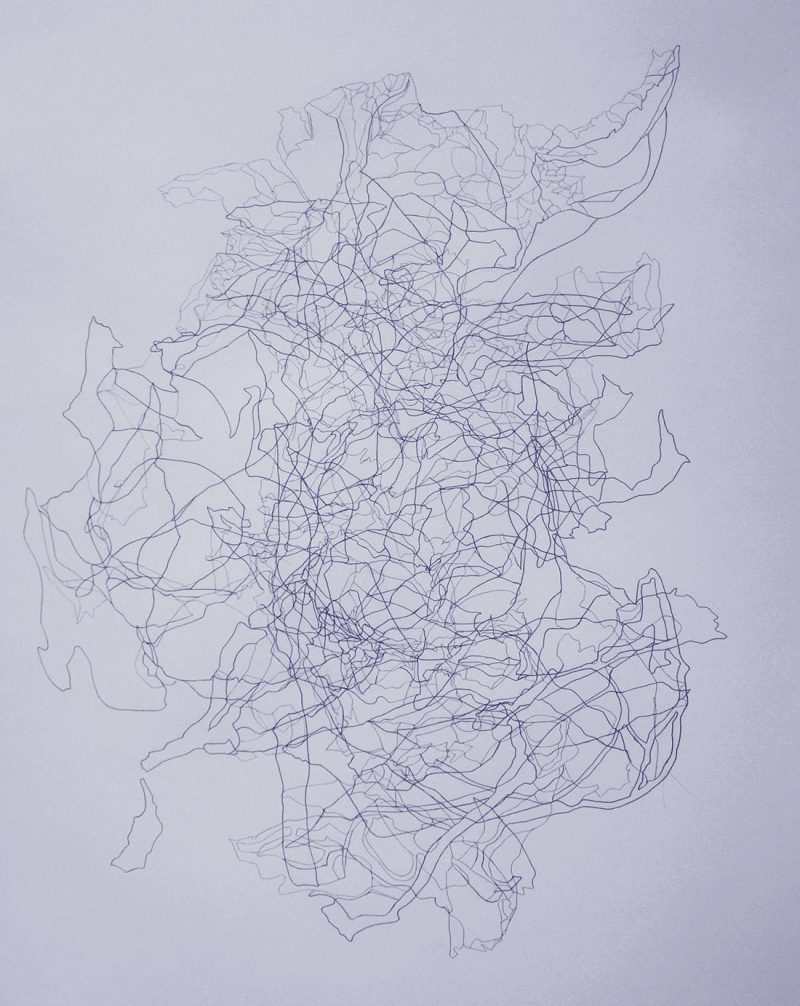 Doa Aly’s work, spanning the mediums of drawing, video and performance, has focused on the use of anatomy, movement and literature to explore the themes of control and alienation. Aly’s drawings reference illustrations of the bones of the human skull, as they appear in the 25th edition of Henry Gray’s Anatomy of the Human Body (1949), (published by Lea and Febiger, Philadelphia). The artist’s interest in these early illustrations of human bones arose from what she perceives as their mimetic ambivalence; in seeking to make true reproductions of real models, the draughtsman produced beautiful and highly enhanced images. Aly sees Gray’s Anatomy’s images as an illustration of the problem of drawing: to draw something is essentially to make it disappear.

Doa Aly’s drawing practice has evolved over the years, becoming more abstract and complex and culminating in the series that includes Drawing #128. The works consist of the layering of simplified lineaments, the accumulation of wandering lines in search of their original forms composing a web of vanishing points and intensities, simultaneously forming, deforming, and transforming.

Doa Aly’s work, spanning the mediums of drawing, video and performance, has focused on the use of anatomy, movement, and literature to explore the themes of control and alienation. Doa was shortlisted for the Abraaj Group Art Prize in 2017 and has had solo exhibitions at the Townhouse, Cairo (2013); Gypsum Gallery, Cairo (2013) and Darat al Funun, Amman (2010). Her work has been exhibited as part of numerous group shows worldwide including Bard College, New York (2017); Downtown Contemporary Arts Festival, Cairo (2016); La Loge, Brussels (2016-2017); The National Museum of Modern and Contemporary Art, Seoul (2015) and The Museum of Modern Art, Warsaw (2015), among others. She holds a BFA in Painting from the Faculty of Fine Arts in Cairo (2001).