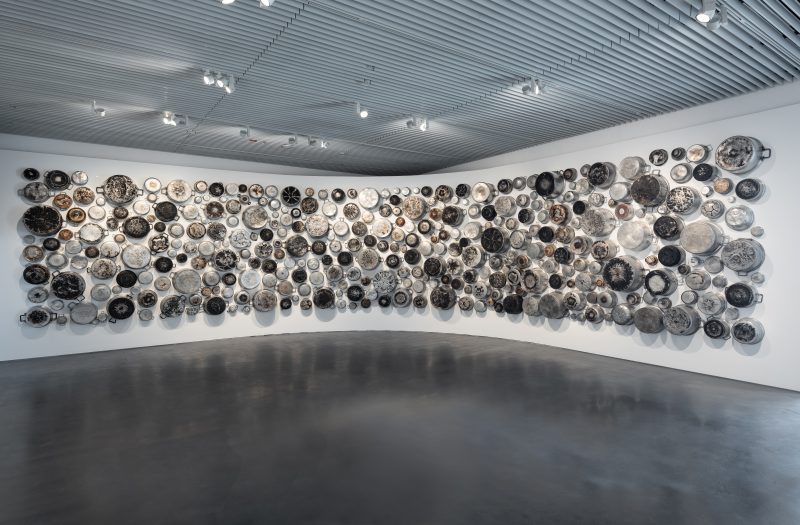 Maha Malluh’s work reflects the vernacular, visual culture of Saudi Arabia, and the impact global trade and consumer culture has had, and continues to have on the country. Al-Muallaqat 4 attempts to create a universe where the visual tradition and the oral one are both celebrated and presented as counterparts. The rustic, aged aluminum pots were collected from various flea markets and junk shops around Saudi Arabia, and were originally used throughout history as cooking vessels. The pots tell the story of cultural identity and heritage; celebrating Arab history, hospitality traditions and the visual testimony of personal histories in Saudi Arabia. These discarded objects, indicative of a globalised ‘throw-away’ culture, are repurposed into large-scale installations and assemblage of objects. The decrepit state of the objects speaks volumes of the culture that once valued them but has now thrown away.

Maha Malluh (b.1959) lives and works between Riyadh, Saudi Arabia.

Maha Malluh’s work is influenced by her spiritual connection to the historic region of Najd, Saudi Arabia, with its distinctive architecture, strong religious and cultural heritage and colourful patterned textiles In recent year, Malluh has turned to mixed media installations, using found objects that are understood as symbolic of a collective, communal identity; these materials include massive chinco dishes, cassette tapes of religious lectures, discarded oil barrels and metal doors typical of the region. Malluh’s work has been exhibited in solo and group shows including at the Louvre Abu Dhabi (2017), Centre Pompidou, Paris (2016)  and the British Museum, London (2012), among other institutions.