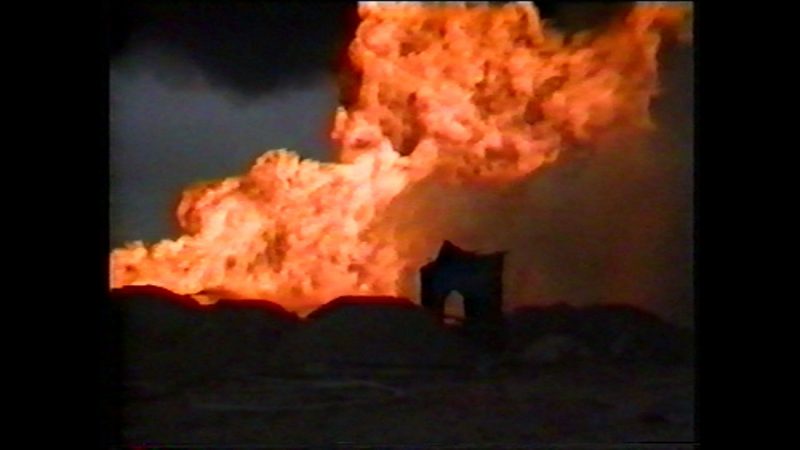 Filmed in 1991, after the end of the Gulf War, Werner Herzog’s Lessons of Darkness (1992) shows Kuwait’s burning oil fields, set ablaze by retreating Iraqi troops, an act that is widely considered to be one of the worst intentional environmental disasters in history. Much of Herzog’s film is composed of sweeping aerial footage shot from a helicopter, whose hovering shadow appears for only a moment. Building on the association of fire with hell, biblical references and operatic music frame and aestheticize the visuals, conjuring a specifically Western mood of apocalyptic doom, detaching the event from history and geography.

In contrast, Monira Al Qadiri’s Behind the Sun, made a little more than two decades after, grounds the event back into its context through the use of contemporaneous local archives. It is composed of shaky found VHS footage of the burning fields shot from the ground with a handheld camera by a Kuwaiti journalist. The visual material is overlaid with a booming baritone recitation of Sufi poetry sourced from the national television archives, its mystical verses locating the divine in the sublime wonders of nature. The juxtaposition introduces a suggestive ambiguity into the image of the oil fire spurting vigourously and mysteriously out of the ground, activating both its demonic and divine connotations, such as the worship of fire in Zoroastrianism.