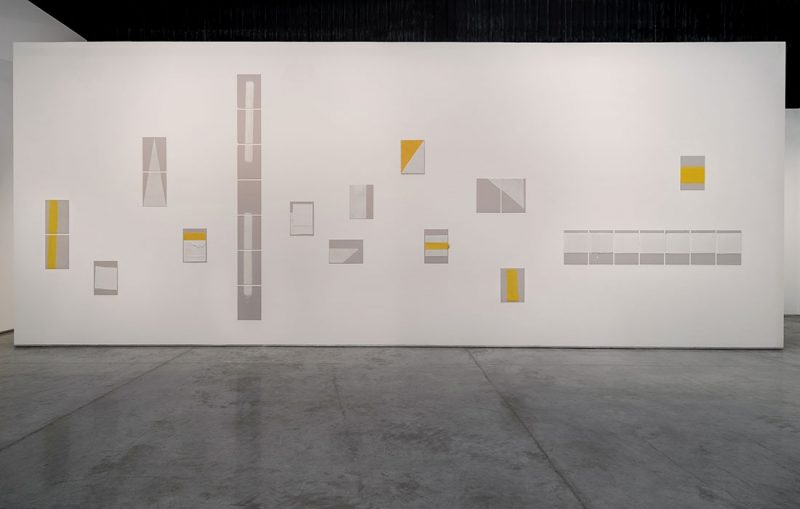 For the Road Marking series, Divecha collaborated with workers who maintain and paint the navigational and safety road markings in Dubai. Using grey rectangular boards, Divecha incorporated the pieces into the mark-making process that was already underway by the workers – the gooey thermoplastic paint was applied either by a hand-pouring technique or by road marking machines. The thick white and yellow marks are almost sculptural in form, creating unique and different textures, including rough crater-like markings on the surface, while others have a smooth glossy finish. The workers also playfully experimented with the medium, creating a noticeable sag in the paint when the boards were dried vertically. Divecha mapped the city’s marked surface at different locations and under varying conditions. Each location and technique is recorded and noted in the artwork captions.

Vikram Divecha’s conceptual and collaborative practice has developed around what he calls ‘found processes’, those forces and capacities at work within urban systems. By realigning social and economic relations his projects often bring invisible structures into plain view, to raise questions about agency, ethics and value. Constantly negotiating for existing material, space and skills, he engages communities in deepening dialogues with potential participants. Despite interacting with largely invisible systems, his works have a definite materiality and formal rigour. His endeavors translate into site-specific works, public art, installations, video, surfaces, photography and drawings. Vikram’s most recent exhibitions include shows at Gallery Isabelle van den Eynde, Dubai (2016 & 2017); Tashkeel, Dubai (2016); Alserkal Commission, Dubai (2016); Ujazdowski Castle, Warsaw (2015); and Maraya Art Centre, Sharjah (2015), among others. Recipient of the 2014 Middle East Emergent Artist Prize, he has exhibited works at the National Pavilion of United Arab Emirates at the 57th Venice Biennale and Sharjah Biennial 13 (2017). Divecha is currently doing his MFA at Columbia University, New York.