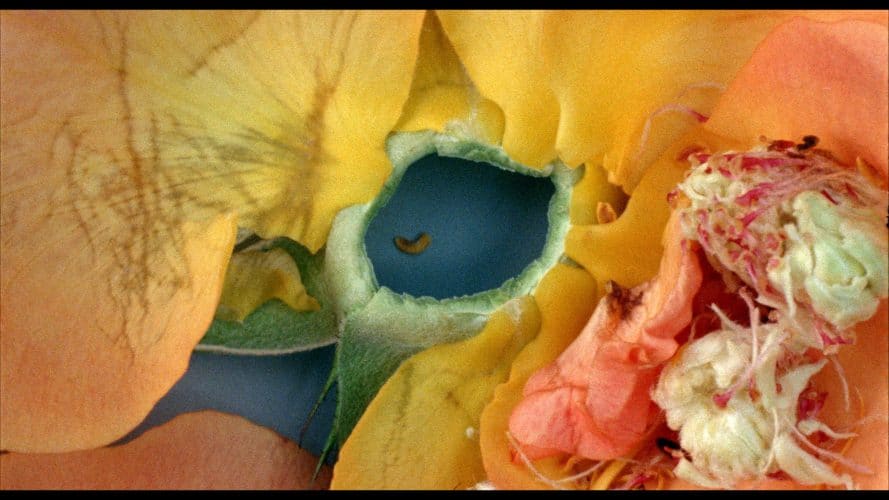 Filmed entirely through the reflection of black mirrors, Erin Espelie’s The Lanthanide Series is a poetic meditation on our elemental relationship to technology, and the visions of the world it produces. Sarah Meyohas’ Cloud of Petals looks at how human traits, such as the concept of beauty, can be taught to AI and the future of human labor in an automated world.

Films: The Lanthanide Series and Cloud of Petals

Filmed in Bell Works, the film documents the digitization of 10,000 rose petals by 16 men, in order to train an AI algorithm to generate an infinite series of new unique petals. The film is a meditation on how human concepts such as beauty or morality can be taught to and embedded in AI systems, while also touching the future of automated labor, and the physical infrastructures left behind as workplaces become digitized.

Sarah Meyohas is a visual artist working across media. For her latest project, Cloud of Petals, she staged a performance at the site of the former Bell Labs. Sixteen workers photographed 100,000 individual rose petals, compiling a massive dataset. This information was used to map out an artificial intelligence algorithm that learned to generate new, unique petals forever. The performance resulted in a film, six gaze-based virtual reality experiences, and a series of sculptures, presented during a large-scale solo exhibition at Red Bull Arts New York. The film has been screened at various festivals, including the Minneapolis St Paul International Film Festival, Slamdance, NY Times Talks, CogX, and the Locarno Film Festival.

From the portals of personal computing devices to ancient obsidian mirrors, optical instruments control how people see, foresee, frame, record, and remember their lives. Filmed entirely through the reflection of black mirrors, The Lanthanide Series meditates on how we understand the world through such material means, with a reliance on history, the Periodic Table, and those closest to us.

Erin Espelie is a filmmaker, writer, researcher, and editor, whose science-based experimental and poetic documentaries have shown at the New York Film Festival, the International Film Festival Rotterdam, the British Film Institute’s Experimenta, CPH:DOX, the Copernicus Science Center in Warsaw, the San Francisco Museum of Modern Art, and more. She currently serves as Editor in Chief of Natural History magazine, and works at the University of Colorado Boulder as an assistant professor in Cinema Studies & Critical Media Practices and co-director of NEST (Nature, Environment, Science & Technology) Studio for the Arts.