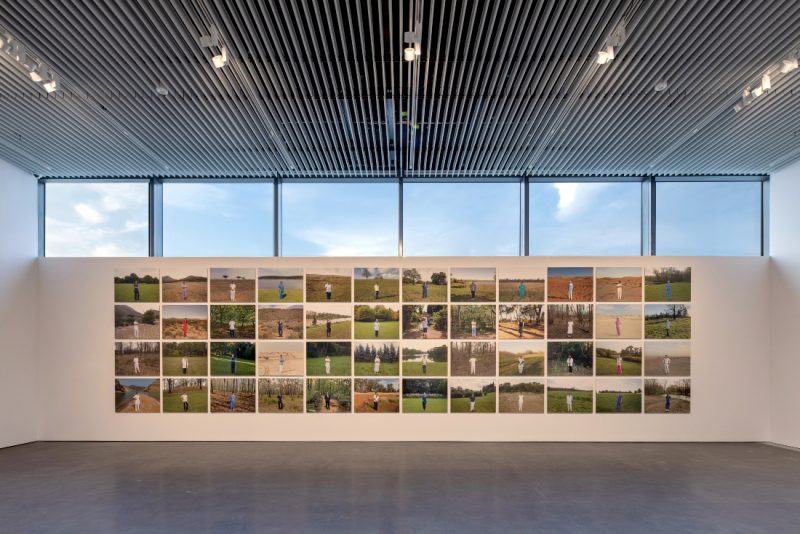 Anup Mathew Thomas works primarily in photography and is interested in the slippages between documentary and artistic practice, frequently deploying carefully staged portraiture. Nurses is a series of portraits capturing women from Kerala who were employed in hospitals and care facilities around the world.

Nurses form the single largest group of professional female migrants from Kerala, where the economy is largely dependent on foreign remittances. Through various networks, Thomas located women from the nursing profession willing to be included in this typological project. Each subject was asked to pose in her professional uniform in an outdoor setting close to her place of work. Marking their dislocation from Kerala, each isolated figure is placed centrally within their new adoptive habitats, which range from forests in Europe, to hills in North America and deserts in the Middle East. Displayed in a grid, the images form a patchwork background from which the individuals emerge, often smiling, confidently looking directly at the camera. Uprooted from their homes, and relocated to new countries, these women come together as a visual record of possible variations within contemporary migratory patterns.

Anup Mathew Thomas (b.1977, lives and works in Bangalore, India) works primarily with photography. His works engage ostensibly local narratives, introducing audiences to stories that may have gone missing from the archive. Over the last two decades, he has produced a series of projects that engage with and make reference to the cultural history of his native Kerala. Predominantly working in series, his images offer access to microhistories and subcultures embedded in the seemingly every day. He employs both anecdotal and factual narrative styles, and the work often culminates in carefully staged portraiture. In exploring the slippages between documentary and artistic practice, Thomas’s work is consistently in dialogue with the complexities of representation through the photographic image. They also bring to light phenomena and social realities in Kerala and India that are hard to grasp, such as the perpetuation of cultural myths that reinforce social hierarchies, or which generate behaviours mixing religious and political practices.

Thomas studied Art and Design at the Srishti School of Art, Design and Technology, Bangalore (2003). He has held solo exhibitions at Bangkok Art and Culture Centre (2016); Lothringer13, Munich (2013); Contemporary Image Collective, Cairo (2010); and Gasworks Gallery, London (2007). He has also participated in group exhibitions at Institute of Contemporary Arts, Singapore (2017); Kochi-Muziris Biennale, Kochi (2012); The Matter Within, Yerba Buena Center for the Arts, San Francisco (2011); Generation in Transition, Zacheta National Gallery of Art, Warsaw (2011); The Self and the Other, La Virreina Centre de la Imatge, Barcelona (2009-10); and Lapdogs of the Bourgeoisie, Arnolfini, Bristol (2009). He was the recipient of the Han Nefkens Foundation, BACC Award for Contemporary Art (2015) and the Abraaj Group Art Prize (2014).