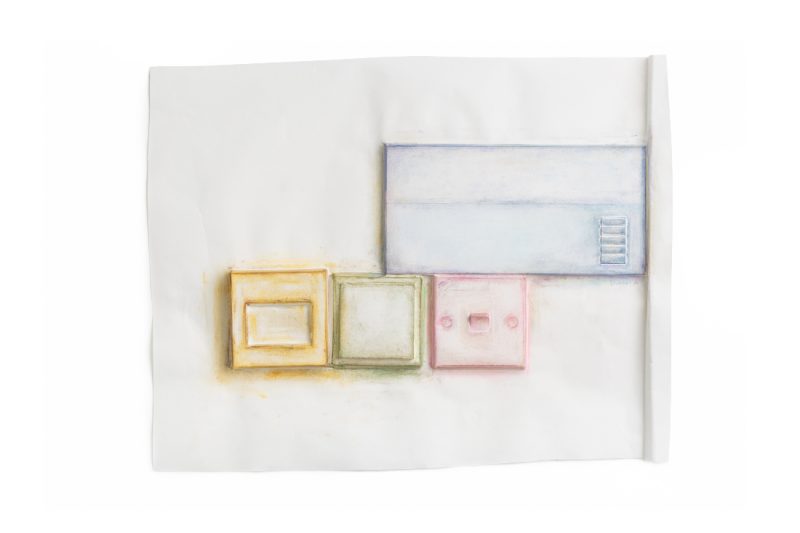 Do Ho Suh uses the process of rubbing to create tactile drawings that rely on touch rather than sight and sensation rather than replication; for the artist, it is a method of exploration and discovery, one that is physical in its process while also demanding personal and emotional engagement. This method of obtaining an impression of a raised or textured surface by placing paper over it and rubbing it with graphite or crayon is also used in the development of Suh’s fabric works. Rather than photographing a space or taking measurements, Suh often creates rubbings on large sheets of paper to gain valuable information, such as the dimensions and physical characteristics of the space.

The title of the work comments on the limitations, discrepancies and humour that come with bilingualism, particularly in the translation from his mother tongue to his adopted English. In Korean, there are no distinguishing sounds between the letters / and r, or between the letters b and v; therefore, the pronunciation of the English word “rubbing” sounds uncannily similar to that of “loving”. The confusion stemming from mispronunciations of these words creates a relationship that is important for Suh. Rubbing is an act of loving, and he employs it as a way to excavate spaces, caressing the walls to unveil their hidden stories.

Do Ho Suh (b. 1962, lives and works in London, UK) works across various media, creating drawings, film, and sculptural works that confront questions of home, physical space, displacement, memory, individuality, and collectivity. He received a BFA in painting from Rhode Island School of Design (1994) and a MFA in sculpture from Yale University (1997).