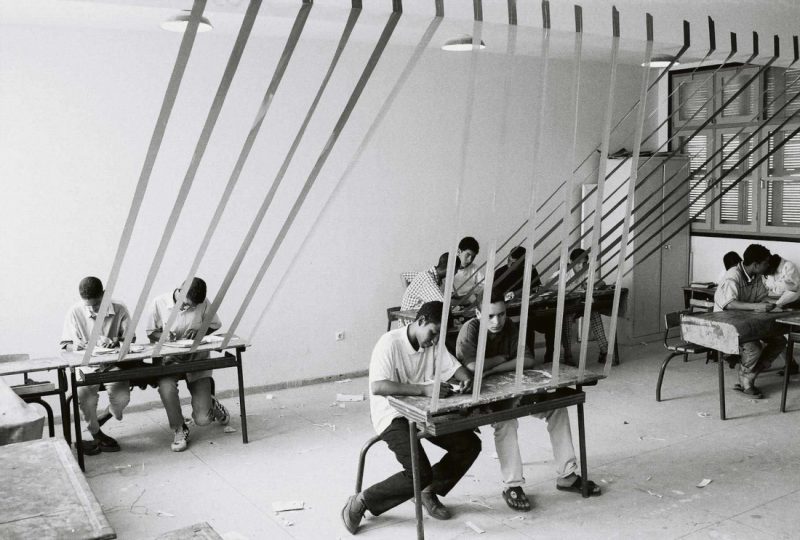 Photograph, gelatin silver print on paper and mounted on aluminium

The Classroom is comprised of over one hundred photographs captured while Hicham Benohoud was working as an art teacher in Marrakech. He actively involved his students in the making process, often providing physical constraints, prescribing specific poses and gestures or offering up different accessories to wear or use in order to construct within the space. In some of the photographs, several students continue to work studiously at their desks while others are presented in strange poses in the classroom, as if its spatial limits had been extended by force. Their bodies are depicted in an enclosed space, making the use of light critical in the transformation of these young people into “living sculptures”.

These seemingly calm images also suggest a violent tension. Benohoud is not a passing observer documenting moments caught by chance, but rather acts as a director staging a series of scenes in which his pupils enact power relations between the individual and the institution. Collapsing the distance between the photographer, the subject and the viewer, The Classroom series questions viewers’ attitudes towards their own pleasure or discomfort at seeing these ambiguous scenes. Benohoud’s imagery references both the art of pantomime and the confined environment, drawing on the artist’s familiarity with French philosopher Michel Foucault’s writings on carceral spaces.

Hicham Benohoud’s (b. 1968, lives and works between Paris and Casablanca, Morocco) work includes photography, painting and new media, focusing on the link between identity politics and power relations, often using portraiture in his staged photographs. He has a Bachelor’s degree in plastic arts (1987) and studied plastic arts at the Ecole supérieure des Arts décoratifs in Strasbourg, France (2003).