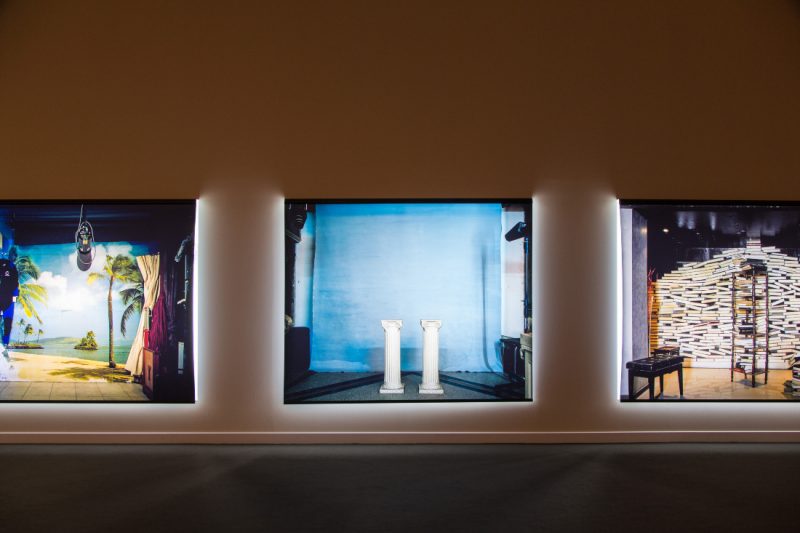 Background marks the disappearance of a tradition of studio portraiture integral to the history and development of Middle Eastern photography in the twentieth century by documenting one of its central artefacts: the studio backdrop. Hrair Sarkissian photographed hundreds of examples of backdrops he found in studios across six cities-Alexandria, Amman, Beirut, Byblos, Cairo and Istanbul-and then selected one from each location. Large-scale, backlit and hung unframed, like the backdrops themselves, these photographs both monumentalise and eulogise their subject. Without the distraction of a sitter in the foreground, our focus shifts to the backdrop itself and to the tools and spaces historically used for studio portraiture. The spaces are empty and the backdrops appear disused-like ruins or relics of a tradition that has finally run its course, the absent sitter introduces a melancholy quality that radiates from the emptiness.

The inspiration for this project arose from Sarkissian’s own memories of his father’s photographic studio in Damascus, which closed in 2011. These backdrops, absent of their sitters, become symbols of lost traditions, cultural identity and time, while commemorating to a certain period within a society.

Hrair Sarkissian’s (b. 1973, lives and works in The Hague, Netherlands) photographic practice is characterised by an element of search, as well as the dichotomy of visible/invisible. The search relates to answers about his personal memories and history, while the engagement with what is visible and what is not comes as a re-evaluation of larger historical, religious and social narratives. The invisibility versus visibility is evident in his often deserted landscapes and locations, devoid of human presence yet filled with human existence. Mankind’s intervention is, although invisible, tangible through the buildings undergoing construction or the ruined cityscapes, remnants of conflict.