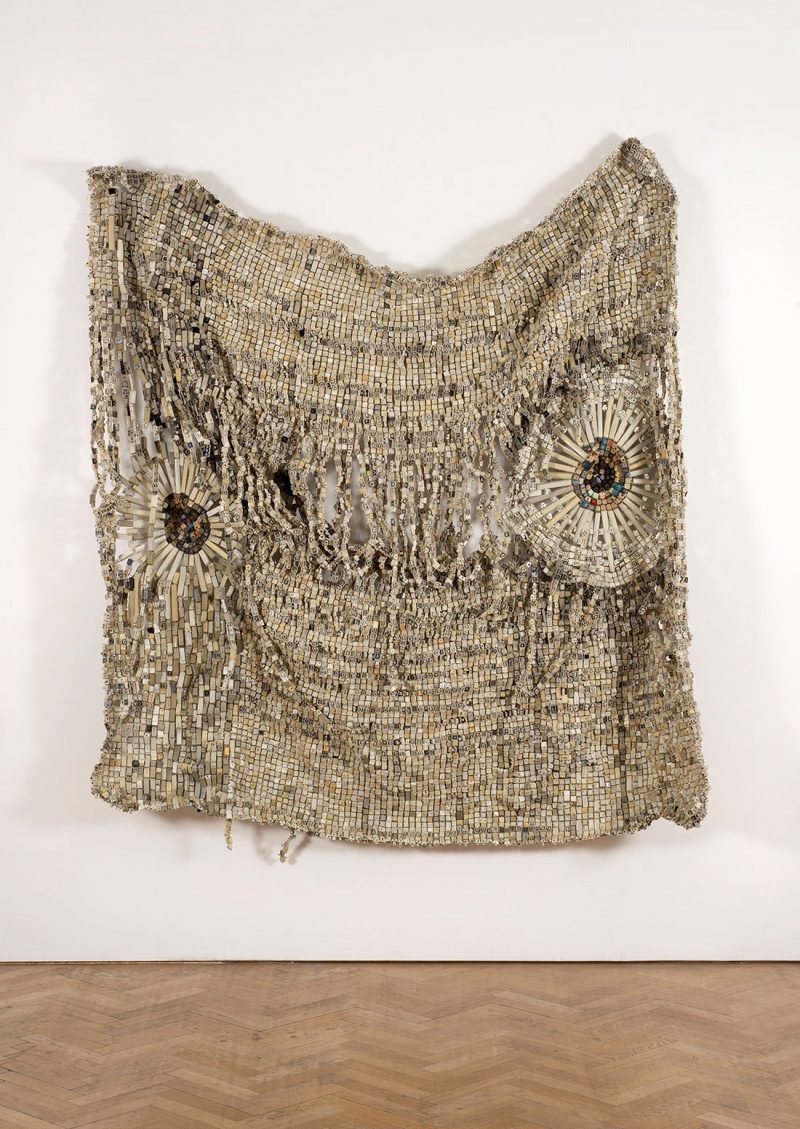 Second Hand Information is made of English-language computer keys, presenting a critical reassessment of post- and neo-colonial aspects of the English language, a legacy of Zimbabwe’s former colonial past as the British Crown colony of Rhodesia. Takadiwa reflects on the divisive nature of English, its tendency to exacerbate class divisions in Zimbabwean society and its power to both shape and undermine contemporary constructions of post-independence cultural identity.

These computer keys appear to have been woven together like traditional Zimbabwean textiles, but are here modified into a more contemporary aesthetic. In a sharp act of subversion, Takadiwa deconstructs and subverts the English language itself by arranging the keys seemingly randomly so they are not legible in any way. Takadiwa has also turned most of the lettered keys upside down, with the crown rendered invisible; his material strategies embody struggles around the dominance of the English and the urgency of preserving and promoting Bantu languages, as well as other aspects of pre-colonial Zimbabwean culture.

Moffat Takadiwa (b.1983) lives and works in Zimbabwe.

Moffat Takadiwa is a leading figure within the post-independence generation of artists in Zimbabwe. He addresses material culture, spirituality and the environment through works that weave discarded small, found everyday objects into organic forms reminiscent of jewel-encrusted excess or ritualistic minimalism. Communicating his concerns of consumerism and post-colonialism, Moffat takes aesthetic inspiration from his own traditions. Recent solo exhibitions include Nicodim Gallery, Los Angeles (2019); Tyburn Gallery, London (2017); Whatiftheworld, Cape Town (2016); FNB Joburg Art Fair, Johannesburg (2015) and First Floor Gallery, Harare (2012). His work has been part of group exhibitions at Museum of African Contemporary Art Al Maaden, Marrakech (2019); Evergold Projects, San Francisco (2018); Nest, The Hague (2018); Watou Art Festival, Belgium (2017); and Galleries Lafayette, Paris (2017), among others. Moffat was a founding member of a First Floor Gallery in Harare (2009) and has since received many awards, including the Award of Merit, Cottco Exhibition and Prize, National Gallery of Zimbabwe (2016).