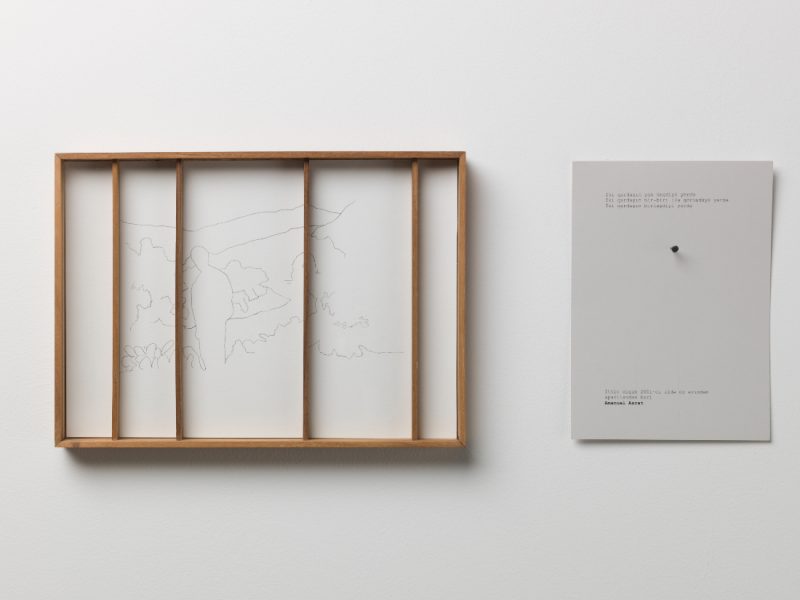 Shilpa Gupta is interested in the power of words, and how language is used as an instrument of both control and cultural resistance. Considering language as an act of resistance but also as a test for the limits of freedom, Shilpa Gupta has developed several works that consider poets and the personal ramifications of their writing. Untitled is representative of missing or imprisoned poets. Each work is comprised of a fragment of text written by a poet, and a faint drawing behind wooden frames emulating prison bars, rendering their absence or erasure more visible.

The work focuses on ten imprisoned writers including Chinese poet and artist Liu Xia, who has been living under strict house arrest since her husband, poet and activist Liu Xiaobo, was imprisoned in 2009 for “inciting subversion of state power”; imprisoned Russian dissident Irina Ratushinskay, who scratched words onto soap, memorised, washed away and then rewrote the text on cigarette papers to smuggle it out of prison; and the Nigerian writer and Nobel Prize winner Wole Soyinka, who was a vocal opponent of oppressive regimes and actively participated in progressive movements calling for justice and equality.

Shilpa Gupta (b.1976, lives and works in Mumbai, India) has an interdisciplinary approach to challenging prevailing notions of individual and collective cultural identity within her work. She examines the role of perception and subjectivity in the status of objects, places, people and experiences, and the way value is defined and impacted by nationalism, trade, religion and notions of security.