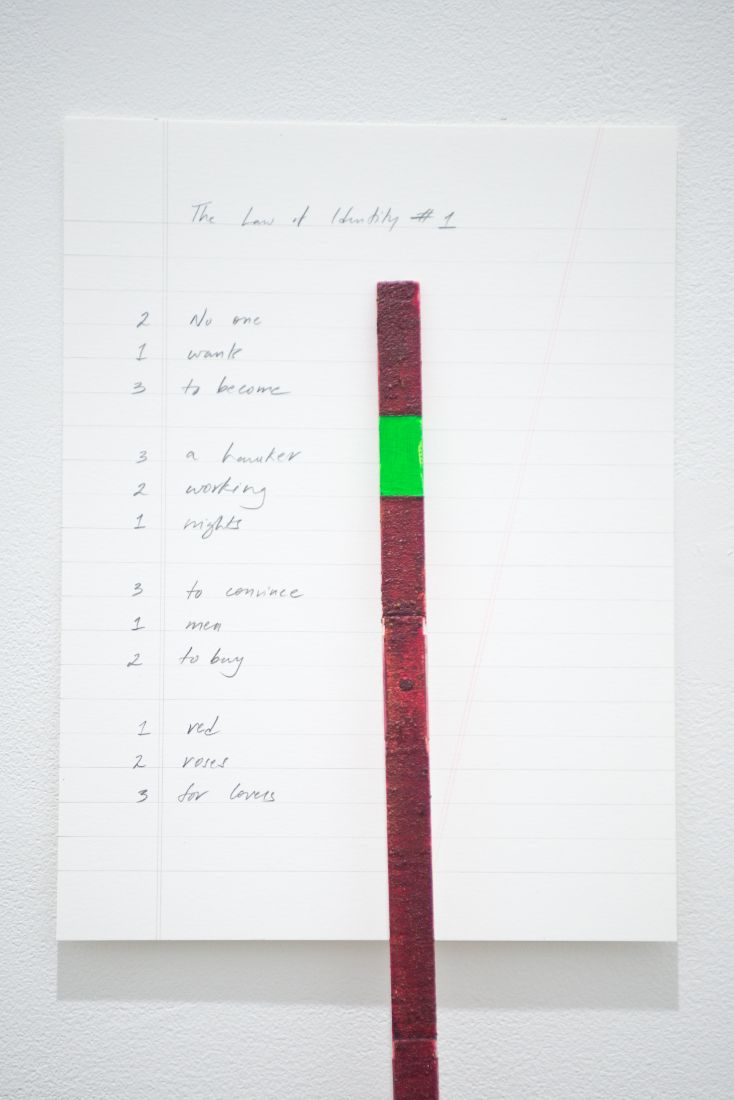 Recto/Verso and The Law of Identity #1, #2, #3 and #4 were created during a residency in Italy, where Sreshta Rit Premnath looked at the relationship between the Polish conceptual artist Andre Cadere (1934-1978) and Bangladeshi rose sellers in Rome. Born in Bangladesh and raised in North America, Premnath noticed that his physical attributes, in a very general sense, resembled that of the flower sellers. Similarly, Cade re, a Polish-born artist of Romanian descent, was seen as an immigrant by the art world of Paris, where he lived in the 1970s. Uninvited, he often attended art openings, where he discreetly leaned his works against the walls of other artists’ exhibitions. These works, known as Barres de Bois Rond, were essentially wooden dowels painted in segments in successive variations.

The Law of Identity #1, #2, #3 and #4 consists of four folding rulers painted with rose extract leaning against the gallery walls, like tired bodies or markers that perform a kind of pointing. The rulers are placed against the wall in the same manner in which Cadere placed his wooden dowels. They lean against the wall and direct the viewers’ attention to the gallery space, while also acting as tools that describe space through measurement. These objects continue Premnath’s use of folding rulers as ‘bodies’ that both occupy and measure space.

Sreshta Rit Premnath (b. 1979, lives and works in Brooklyn, New York) is a multidisciplinary artist and the founding editor of Shifter, an issue based journal featuring contemporary art, creative writing and critical theory. Premnath completed a BFA at The Cleveland Institute of Art (2003), MFA at Bard College (2006), and has attended the Whitney Independent Study Program, Skowhegan and Smack Mellon. Premnath is the Director of the BFA Fine Arts program at Parsons School of Design, The New School, New York.